I like this blog hop. A lot. Thanks, I Will Jump Sweet Jumps.

Here are some of the jumps that have made this whole circus worth it:


We had some great jumps on Monday night; I wish we had some video, but I went out solo and we conquered some demons. The Big bank, some of the coops we haven't jumped before, the ditch on the FIRST TIME (thank you very much), and the table I term "novice". It jumped almost exactly the same as the other one. Shocking, I know. Other than a continued inability to turn right (she's not an omni turner, ok??) Bailey was workably obedient and didn't shut down when she stopped. I think it helped that I wasn't really feeling any pressure (at least from a trainer; I was out there on my own and had skipped armor because it was hot AF) and therefore was disciplining her but not really getting mad. It was too hot to get mad.

I haven't been riding this week because of the heat; today it's supposed to be mid to upper 90's and humid AF. I hung fans, jumped some jumps and went home. A friend's snapchat has verified that Foxie is still alive, and I assume they would call me if Bailey up and died. So... we'll see what I have tomorrow. Or this weekend. Or whenever I get out to the barn. Because I really ought to ride before the Dom Schramm Clinic...

Posted by TheFoxRider at 8:53 AM No comments:

All of the Dressage

I had the Classic Saddlery dressage out on trial all last week, so of course, we did a lot of dressage.

Tuesday Bailey was good, as I talk about in my last post. Thursday morning, Bailey had a teeth floating appointment so I got to the barn super early to get her ridden before then. She was still inside, and despite not having been turned out yet, she was pretty darn good. Quiet and forward again, and her canter has either improved because of the saddle, or the saddle makes it actually feel like a canter and not like a legs-going-everywhere kind of floppy thing. However, her sweat marks left some things to be desired; long, somewhat wide dry spots where the panels would be. I had played with the tree, and decided to play with it again before Saturday.

Teeth floating itself went well; the vet was in and out quickly and while she definitely needed it, she didn't seem adversely affected by the procedure. She was still her usual hungry, stall walking self. I took the saddle over to a local repair place on Friday during my lunch hour to have the rip looked at, and delightfully it doesn't *need* repair. I need to be careful to not injure it further, but it doesn't adversely impact the use of the saddle... so I can repair it myself, or stick some tape over it, or have it repaired as time and money allows. The saddler also showed me that black saddle soap exists and how amazing it made my saddle look - definitely getting some!

Saturday came, and after a morning photo shoot with a client, I pulled BB out for one last ride in the Classic. My bid on a lovely used buffalo leather model had been countered higher than I was willing to pay, so I was starting to look at my options and be unhappy. But really looking at it, the saddle isn't that bad. The scratches are hidden when I ride, and honestly... the unsightly damage is just unsightly. But I don't look at my saddle, I ride in it. I had forgotten until writing this that my Vision has a cut in the seat; unsightly, but has NEVER been a problem. It looks the same as it always has, despite many miles. I had a so-so ride; the horse was definitely not magically softening her jaw because I dropped money on her teeth (shocking, I know) but after a bit of wrestling, she settled and gave me some lovely work. I decided, on my way back, that I hadn't successfully narrowed the tree to what I needed; when I was in the tack, I felt like her withers were nearly touching the top of the gullet.

But I pulled my stirrups off and got it ready to go back to St. Croix... and when I arrived, they asked if I wanted to put an offer in. I mentioned the rip and other things, and the gal who was helping me conspiratorily said she'd offer $550 for it. I said, ok, lets do that. And she called, and left a message, and I was all ready to leave when she got a call back with a counter - $600. And I took it.

So I own a dressage saddle now, bringing my total saddle count up to 5. Jesus.

It's time to sell some saddles!
Posted by TheFoxRider at 12:18 PM 1 comment:

So I've spent most of this week shopping obsessively all over the internet trying to find myself a majikal Classic Saddlery saddle.

So far I have discovered:

1. The internet sucks.
2. There aren't too many of these suckers for sale
3. Facebook saddle propositioning is the worst.
4. Closely followed by tack stores who don't check their emails, apparently.
5. No one agrees on how to photograph or measure things.

Last night I bit the bullet and checked the damn thing out for a trial. I brought it out to the barn, plopped it on my benevolent red horse and stared at it. Then I swapped it for my current saddle. And then back. I played with the adjustable tree. I groped hopelessly for the last rib. 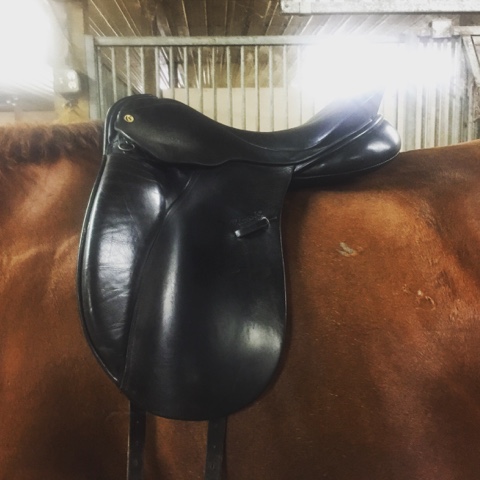 And finally, I said "fuck it" and tacked up to ride. I worried about getting bucked off; no bucks were offered. So we went out to play outside. And angels sang (quietly) again. Bailey was softer in the bridle than usual, and once I stopped pushing my leg forward, I actually felt like I wasn't flopping all over the place and had control of my leg aids. Like I could be subtle. It also pushed my hips up and forced me to ride with my chest up and open... and not like a gollum hunched over my horse. The big blocks were supportive but not forceful, and didn't push my leg back like that one time I rode in a Wintec with Contourblocks. Basically, my body was where it was supposed to be and riding BB and dressage was easy. Cantering was easy. Doing things while also cantering was also easy. It was just... great.

The problem? The saddle does have some unsightly issues; scratches, some fading... and a weird rip in the gullet area. So I need to look at it really hard and a) decide if it's worth keeping and b) probably call a saddle fitter to get the thing fitted. In the mean time, I've compiled a list of similar brand/model saddles... that way if I decide it's too long, I can get measurements of an 18". Or if I decide I don't necesarily need the adjustable tree, I can look at fixed tree models. So I have options, but I want the unicorn perfect saddle.

Of course I do.

While most of the eventing community of our area was off at the Championships horse trial (where I should have been photographer-ing, but whatever. The world is filled with assholes) I met up with a friend, and we had a pony half day. Of course, it started to go off the rails before it even began; she was running late, and it was hot AF.

So we started our weekend at a local tack shop, St. Croix Saddlery. I pawed all sorts of gorgeous clothes, and did not make direct eye contact with the saddle pads. I have been feeling, lately, like I want more block in a dressage saddle but have also never not gotten into a fight with dressage saddle blocks... so I started pulling saddles off the wall (mostly under 1,000$, I didn't want to sit in something too expensive and LOVE it). So I sat in a Bates, a Passier, a Thronhill Vienna and I think... and Ideal. And then I pulled another saddle off the wall simply because it had big blocks (though jesus, they're ugly) and looked super flat through the panel.

And I love it, guys. I don't know if I was just sitting in awful things before (wide twists, made for people with less leg than me) but its like the heavens sang. I felt like I was secure... but like I had a lot of mobility. The blocks were not pushing my legs back, for the first time ever in a saddle with blocks larger than your standard hunter saddle. The problem? It's on sale. And it's not in the greatest condition ever. And it's an 18.5. But I can't get it off of my mind, so I'm probably going to pick it up for a trial and see if I can crank (its a rotate-to-fit) it in enough to make it work for the B. And see if it sits past her last rib.

I'm about 98% sure that what I am looking at is a Classic Saddlery Classic Select. It's a "forward balanced saddle" which means... nothing to me. It also talks about pelvic floor, which means nothing to me but someone on Chrono of the Horse is saying that it works well for people who find twists on most dressage saddles too wide (raises hand Herminone-Granger style).

But looking at it, I could get a basically custom saddle for quite a decent price:

They don't price out some of the other extras - a point billet, short flexible points, flap length, etc... so maybe they're free? Plus you get free reflocking (I pay shipping) for the first year of ownership.

So I could get an adjustable, base saddle for 1596.00. Or an adjustable, fancy leather saddle (Apparently one can choose from European, Swiss, French, Buffalo or doubled leather) for 1695.00...

I've got an email out to Lynnda at Classic Saddlery to see if she has anything good, too. The saddle I sat in wasn't in the most amazing condition, but I didn't look at it that hard. It could still be a good value.

Posted by TheFoxRider at 8:39 AM No comments: